The short film series, “Transcendance,” was directed by London-based filmmaker Eddie Whelan, who is known for collaborations with luxury brands such as Comme des Garçons. The Moncler 1952 Man collection, which channels euphoria and freneticism, debuts in time for the fall/winter season.

“There is a lightness of spirit and energy in this campaign that mirrors 90’s club culture but also embodies an era that rejoiced in authentic freedom and carefree attitudes,” he said. “What also comes across in this campaign is the joy of self-expression through dance, the bold use of vivid colors and even a playful reimagined logo signaling a brand who doesn’t take itself too seriously.”

Putting the Dance in “Transcendance”
The campaign, featuring movement artist Thomas Heyes, is a film that exudes strong themes of urbanity and dance and begins with a contorting dancer artistically bending his limbs.

The word “Moncler,” flashes across the screen with enthralling intensity. Not unlike a blinking neon sign beckoning passersby into an establishment, the rapidly appearing letters make it hard to look away.

As intense bass-driven music plays with the steady insistence of a heartbeat, “Transcendance,” appears across the screen. Two dancers move rhythmically and fluidly, as purple light saturates their clothing.

In a continuation of dramatic and artificial coloring, two dancers in Moncler Achill Short Down Jackets in the shades Bright Orange and Grass Green sway energetically to the beat. As if hypnotized by the music, the two dancers bounce and jerk synchronously.

The visuals become blurred in a way that suggests breath fogging up the screen. Respiration, exertion and movement are the natural results of the relentless rhythm.

The silhouettes of the dancers can be seen amidst flashing lights that liken the scene to a dance club environment. Texture is the star of the scene, as the round density of oversized puffer jackets and the soft down of teddy fleece ensembles compete for the viewer’s attention.

Coordinated dance that is executed to mimic fighting ensues. A dancer reaches out as if to strike a blow and swerves smoothly into dexterous dance moves.

The vigorous dancing never ends as “Transcendance,” appears across the screen, but the film does. Closing out, the final scene is the white Moncler logo on a black expansive background.

Fancy Footwork for Fall
More and more luxury brands are turning to dance as a robust articulation of their personality and style. Dance and movement, especially on social media platforms, is a powerful marketing tool to appeal to younger demographics.

Dance is a powerful vehicle for connection and can linger in the mind of the consumer. Joyous movement and dance also characterized a recent Valentino campaign starring actress and musician Zendaya (see story).

“The mix of colorful, oversized and multi-functional pieces in this collection is very on-trend for luxury menswear at the moment, especially to a younger audience who require their fashion to work across multiple locations and occasions,” Mr. Bruck said. 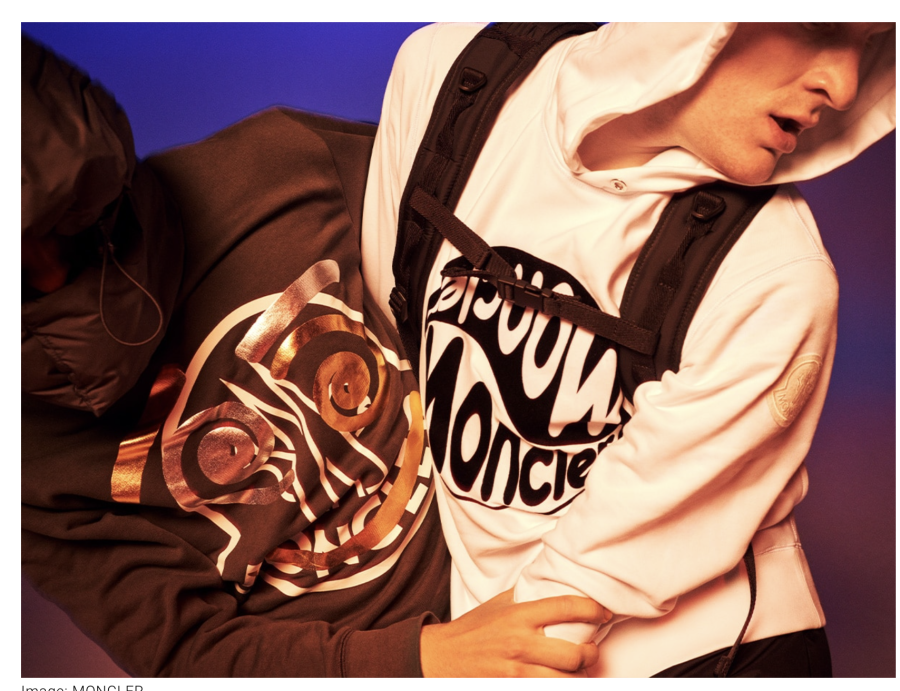